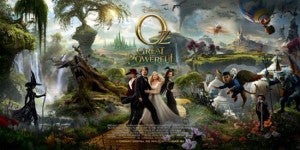 Earlier today, Walt Disney Studios released a brief teaser trailer in connection with a Twitter sweepstakes, encouraging fans of Oz, the Great and Powerful to tweet their New Year's wish using the hashtag #DisneyOz for a chance to win a trip to the Emerald City. No, not that one. Seattle. The contest runs from now until January 31 and also features a number of "instant win" prizes like books, posters and giftcards. Check out the official release and the video below:

Disney announced today that they are launching a New Year's Sweepstakes and an Instant Win game on December 31st in support of their upcoming, Sam Raimi-helmed film "Oz The Great and Powerful," which opens in U.S. theaters on March 8, 2013. The promotion runs through January 31, 2013, and offers a Grand Prize as well as Instant Win Prizes. Inspired by the wizard's journey, the Road to the Emerald City Sweepstakes invites fans to Tweet their New Year's resolutions, using #DisneyOz, for a chance to win the Grand Prize—a 4-day/3-night trip to Seattle, Wash., for two. Visit the official Oz The Great and Powerful Facebook page to watch the Tweets pave the way to the Emerald City and click on select bricks to instantly win prizes, including $100 gift cards for HSN (Home Shopping Network), $50 Visa cards, $10 Starbucks gift cards, copies of the L. Frank Baum Book, "The Wonderful Wizard of Oz," signed movie posters, and other "Oz The Great and Powerful" products. Visit the Road to the Emerald City experience, play the Instant Win game, and view Official Rules: https://www.facebook.com/OzTheGreatAndPowerful