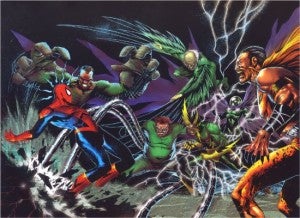 Paul Giamatti won't answer for sure if the Sinister Six will be in the Amazing Spider-Man 3, because he claims not to know. However, Giamatti did reveal that he's not an idiot and he thinks that the stage is being set for the Sinister Six. There have been lots of concerns among fans over the number of villains that have both been confirmed and rumored for Amazing Spider-Man 2. In the original Spider-Man trilogy, the third film seemed to suffer from villain overcrowding. But at the same time that some fans are worried about too many villains, other fans are also clamoring at the possibility of seeing the Sinister Six on the big screen. In a new interview with MTV, Paul Giamatti confirms there are several villains in the Amazing Spider-Man 2, but many of them are only in the background.  "And I believe there's a lot of stage-setting for the next film. There are several villains in this movie, and some of them are more foreground and important. Jamie Foxx is and stuff," said Giamatti. "A couple of us are more hanging around the background because I think there will be a bigger deal." When MTV asked Giamatti if the stage was being set specifically for the Sinister Six, Giamatti replied, "I don't actually know, but that seems to be what they're doing. I'm not an idiot either, but I can't claim hard and fast knowledge of this. I won't. I can't because I don't actually know, but you and I can speculate." The Amazing Spider-Man 2 is scheduled to be released  in movie theaters on May 2, 2014.