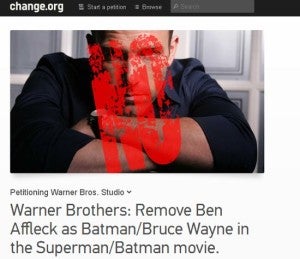 Yesterday, we reported on a change.org petition to have Warner Bros. remove Ben Affleck as Batman/Bruce Wayne in the Superman/Batman movie. At the time, the petition had reached 25,000 signatures, which was about half the number of protest letters that Warner Bros. reportedly received back in the eighties when Michael Keaton was cast as Batman. In the course of just around 24 hours, the petition has doubled in size, reaching 50,000 signatures. At this rate, the petition could surpass 100,000 signatures in just a couple more days. Warner Bros. has yet to issue any official comment on or acknowledge the petition. While the movement to get Ben Affleck fired from the Batman job has been going strong, there also seems to be a backlash starting to arise against the Affleck haters. Numerous articles have been published defending the selection of Ben Affleck as Batman. Several celebrities have also voiced their support for Ben Affleck including Joss Whedon, Chris O'Donnell, Val Kilmer, and Patton Oswalt.