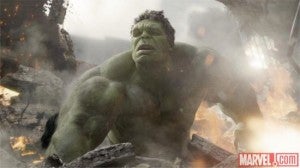 With the popularity of The Hulk in Marvel's The Avengers, many fans and most members of the entertainment press speculated that it was only a matter of time before Mark Ruffalo might be given a shot at a solo film, especially since The Incredible Hulk is a "brand" in which Marvel has substantial investment already and which has proven its ability to be a success in the past. Well, it looks like that's still a no-go, even though Marvel Studios President Kevin Feige can see the appeal of stories like World War Hulk and Planet Hulk on the big screen. "I don't think there's a lot that we couldn't do someday, as the cinematic universe continues to grow and expand and get as big as the comic book universe," Feige told MTV. "Planet Hulk is a cool story. World War Hulk is a cool story." The producer added, "Do I think Hulk can carry a movie and be as entertaining as he was in Avengers? I do believe that. I do believe he absolutely could. We certainly are not even going to attempt that until Avengers 2, so there's a lot of time to think about it." He did concede that it's tempting, especially given the success that Ruffalo has had with the character. Given the failure of award winners like Ed Norton and Eric Bana to really nail it, it's clear that both the technology (a heavy focus on some of the special features on the forthcoming Avengers Blu-ray) and Ruffalo were key to making the character a success. "I think the pathos and humor, most importantly, that Mark and Joss brought to it showcased a different element of Hulk that's there in the comics, and was always inherent in his character," Feige said, "but when he was so brooding in his other two films, he didn't get to have that wry sense of humor that Mark did such an amazing job performing."