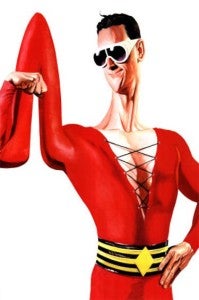 While there is rather flimsy evidence to back this rumor up, it's gaining steam online, probably because it's just so interesting. According to JoBlo.com, Warner Bros. is rumored to be considering putting Plastic Man in the lineup for the upcoming Justice League movie to provide comic relief. Now, the very thought of Warner Bros. intentionally trying to add comic relief to a movie will probably make fans cringe at the memory of the forced humor in the Green Lantern movie, but it doesn't sound like it might necessarily be a bad thing if the rumors of the actor they are considering are true. For their source, JoBlo.com is citing a message board poster on the Replica Prop Forums, so again this should be taken with a heavy grain of salt. According to the rumor, Warner Bros. is looking at David Tennant for the role. Tennant is best known for playing the tenth doctor in Doctor Who. The rumor reportedly originated from a couple of Hollywood producers claiming to be involved in the Justice League movie. Plastic Man is reportedly being considered for the Justice League movie as DC's answer to Ant-Man, who Warner Bros. is said to believe that Marvel will use for comic relief. Of course, it's still unknown if Ant-Man will ever even be a part of The Avengers, because his introduction doesn't happen until after the upcoming Avengers sequel.