Will The Dark Knight rise above The Avengers to take one of the top three all-time box office spots? A lot of fans seem to think so. 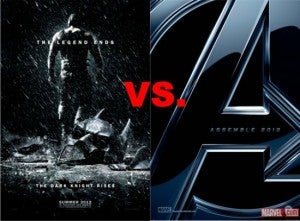 An informal Internet poll conducted at the popular movie website MovieFone suggests that most movie fans think The Dark Knight Rises will outperform the Marvel team-up film when it hits theaters next month. Currently, 57.63% of respondents expect The Dark Knight Rises to outperform The Avengers, while only 42.37% think The Avengers will retain its spot as the highest-grossing movie of the year. While the question was a popular one at the beginning of the summer movie season, the unprecedented success of The Avengers, which exploded into theaters last month with a record-shattering $207 million opening weekend, seemed to have quieted the controversy for a while. As The Dark Knight Rises grows closer, though, and experts are predicting at least $150 million for the film's opening weekend, the questions are coming back. The Dark Knight, Christopher Nolan's second Batman film and the immediate precursor to The Dark Knight Rises, opened with $158 million and went on to be the highest-grossing superhero film of all time, a record it held until The Avengers surpassed it earlier this month. Now the highest-grossing film in the history of the storied Walt Disney Studios, The Avengers is expected to make about $640 million domestically before it leaves theaters, and is one of only a dozen movies ever to beat the $1 billion mark globally. The Avengers is the third-highest-grossing film of all time and fourth internationally, with top two films of all time being James Cameron's Avatar and Titanic, both of which enjoyed rereleases after their first release. That's something what's worth considering in that even if The Dark Knight Rises were to capture the summer box office, it could go back the other way before the end of 2012. There have been rumors that The Avengers might reissue as an "extended cut" later in the year, grabbing another round of headlines and box office dollars and giving fans a longer cut of the film, which does exist and was the first one turned into the studio.

Poll: The Dark Knight Rises Will Beat The Avengers at the Box Office