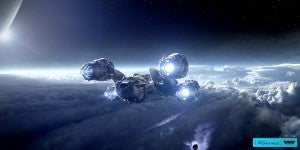 In a new featurette released yesterday, crewmembers working on the upcoming Ridley Scott sci-fi epic Prometheus discuss the titular ship and the work that went into creating it, as a setting that's more than just a taxi service to bring the astronauts from Point A to Point B. It sounds as though they were really shooting for a Millennium Falcon kind of feel, hoping to establish a craft that's also a major setting in the film and that carries with it a personality all its own. "Prometheus talked about all of the things that we wanted the movie to be about," said Executive Producer Damon Lindelof in the featurette. "Creation, defiance of the gods, the hubris of it all." That hubris appears to have consequences, as a spoiler-filled international movie poster seems to suggest that the craft itself might not survive the film, even if its crewmembers do. The film hits theaters on June 8 and stars Idris Elba, Guy Pearce, Michael Fassbender and Charlize Theron, among others. So far the filmmakers have been doing their best to be evasive, but no matter what they do they can't seem to shake the reality that fans want to know exactly how connected this film is to Alien, Ridley Scott's sci-fi classic of which Prometheus began as a prequel. While the studio has soft-pedaled the idea of the film being a part of the previous movie's universe, the presence of numerous items, iconography and even characters has made it pretty clear that's what's happening.