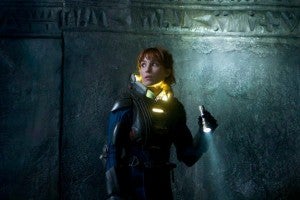 A new viral video promoting Ridley Scott's upcoming sci-fi epic Prometheus sees Dr. Elizabeth Shaw (played by Noomi Rapace and presumably having no connection to the Dr. Who character of the same name) pitching the Prometheus mission to an audience at Weyland Industries who are either very bored or very experimental. The video, marked classified for Weyland personnel only, sees a split-screen version of Shaw, who makes her presentation while one side of the screen has bits of her face constantly being replaced by piece of other faces. It's jarring and fascinating, and the actual ideas brought up in the video make it worth watching even if you weren't already foaming at the mouth for more Prometheus--and really, who isn't? Prometheus will be in theaters in the U.S. on June 8.