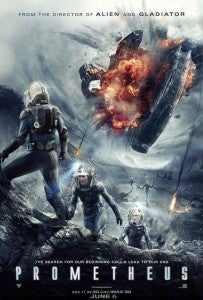 Following on the heels of their dissections of the three big superhero movies of the year, that intrepid gang of Cinema Sins spotters have turned their critical eyes to Ridley Scott's Prometheus. We actually rather liked the movie, although it's impossible to watch the first ten minutes or so without knowing that it's deeply flawed. The Alien prequel has fared alright with critics--it's got a 73% score on Rotten Tomatoes--but those who didn't like it...well, there was an awful lot of very aggressive hate for this movie, and we heard plenty of it on our Facebook page after giving it a decent review. Its supporters, meanwhile, weren't so passionate; it was a movie that didn't really seem to grab anybody and pull them to its side in the same way that it repelled its critics--but it did make enough that a sequel is apparently in the works, so they clearly did something right. But they did a lot wrong--and that's even before you consider the fact that the movie poster shown at right is actually a pretty major spoiler, as the scene depicted doesn't happen until well into the movie. What did Cinema Sins have to say about this movie, which they say exposes "Everything Wrong With Prometheus in Four Minutes or Less"?

Do Prometheus fans exist? We certainly expect to find out. Here are all the sins we counted in Ridley Scott's Prometheus. We had to stretch our time limit to 4 minutes for this one... just too many darn sins.