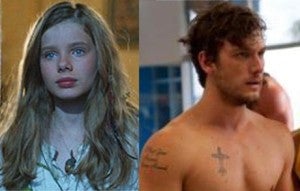 While there have been no official casting announcements in regards to Star Wars Episode VII, the rumors continue to fly fast and furious. For the last couple of weeks, rumors have been swirling that Ian McDiarmid will reprise his role as Emperor Palpatine. However, McDiarmid denied that any conversations had been had or any deals had been struck about his returning for Star Wars Episode VII. Now, Latino Review is reporting that both Rachel Hurd-Wood and Alex Pettyfer are up for roles in Star Wars Episode VII. Hurd-Wood is reportedly auditioning to play the daughter of Princess Leia and Han Solo, but it's unknown what role Pettyfer is auditioning for. Speculation points to Pettyfer auditioning to play Luke Skywalker's son. Neither Hurd-Wood or Pettyfer has landed their parts yet, as things are said to just be in the audition and meeting stage. Hurd-Wood played Wendy Darling in the Peter Pan movie. Pettyfer appeared in both Magic Mike and The Butler. Star Wars Episode VII is scheduled to be released in movie theaters in the summer of 2015.