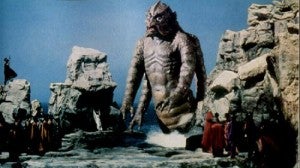 In a recent article about film remakes, my colleague Jack Greer sparked quite a bit of interest and a tad bit of controversy over the inclusion of the 1981 film The Clash of the Titans in that discussion (he LOVES that movie--just not the owl--but thinks the remake will be better). After much debate, discussion and pondering, we've decided that we needed to express our appreciation for the film and most importantly the man behind the creatures in that film, Ray Harryhausen. Our very geekdom was challenged by some with that article, which many thought maligned Harryhausen's work. Let us clear the air now by presenting some classic highlights from the career of the master of the stop motion style of animation! Medusa, Clash of the Titans There's lots to enjoy in this film, centering around the adventures of mythological hero Perseus, but one of the highlights is Perseus' showdown with the gorgan archer, Medusa. Harryhausen's animation gives us each twist and turn of Medusa's serpentine body as she faces off with the warrior, firing her arrows with quiet, deadly precision. And let's not forget those eyes! Skeleton Army, Jason and the Argonauts Perhaps one of the most grueling jobs of Harryhausen's career, animating the army of skeletons in the climatic final battle took months. It's worth the effort, as Jason and his men find themselves facing the undead army in what can arguably be described as one of Harryhausen's best moments, the animated bones slinging their swords and giving Jason all he can handle. Cyclops, The 7th Voyage of Sinbad A prominent part of the this film, the Cyclops hampers several parts of Sinbad's adventure, as he tries to deal with an upcoming marriage, Sokurah and his magic lamp, and giant two-headed birds! The Cyclops has become one of Harryhausen's most well-regarded projects, and judging from the praise the film still receives today, it's easy to see why! Ymir, 20 Million Miles to Earth While Harryhausen has lots of acclaim in the mythological realm, his work in science fiction is also noteworthy! In 20 Million Miles to Earth, the reptilian creature Ymir, hatched from an egg, grows more and more, rapidly becoming a terror to the citizens of Italy. An early showcase of Harryhausen's talent, it's worth a quick viewing! The Kraken, Clash of the Titans Probably the most immediately recognizable of his work, Harryhausen's giant monster from the deep appears briefly in the film, but his debut and impact on the screen are legendary! As he menaces towards princess Andromeda, the Kraken fills the screen in all his glory, frightening those assembled around her, and the audience as well! While obviously this list could go on and on, these are perhaps five of the more classic and most representative pieces out of Mr. Harryhausen's vast career. While no one can ever replicate what he did, it's his films and continued work in animation and production that will be sure to keep a name that people will recognize for years to come.