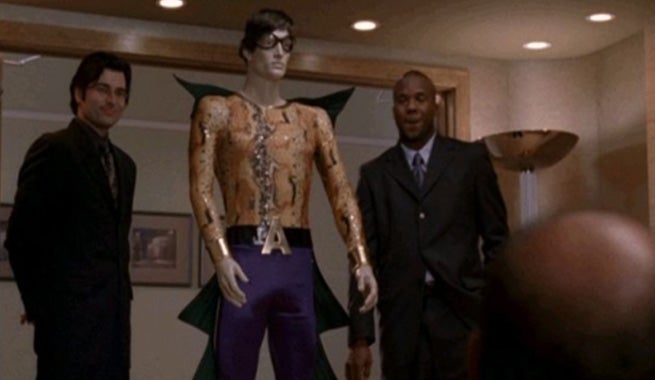 Somewhere within time and space, Aquaman had the biggest box office opening weekend ever. That's because before Jason Momoa was Aquaman, it was Vinny Chase from Entourage.

We now know James Wan is on board to direct the 2018 DC Comics adaptation starring Momoa and building the DC Cinematic Universe, but we all kind of wish we could see James Cameron take on the project like he did in the fictional series. In honor of the Entourage movie playing in theaters this weekend, let's reflect on how it went on HBO.

Vinny was fresh off of his blockbuster, "Queens Boulevard," and looking for a franchise film. His agent, Ari Gold, presented him with the idea of "Aquaman," by pitching it as a franchise and tossing a comic book in Vince's lap. At first, Vince was completely against doing a movie he didn't love and had his heart set on "Medellin."

Of course, Ari doesn't give up...ever. He convinced Vince to at least see the Aquaman suit before making a decision which didn't help. When Vince found out that James Cameron was on board though, he started to sing a bit of a different tune. James Cameron - Titanic, Terminator 2, Aliens...most actors would probably play a talking cat if he asked them to.

So, Vince signed on for three Aquaman films but trouble arose when he found out Mandy Moore was playing Aquagirl. The two used to date and always tends to think with other parts of his body than his head when women are around so naturally some conflict arose there, especially as the two would be hoisted off the ground in front of a green screen for hours each day. Nevertheless, Aquaman was a huge success.

Vincent Chase's Aquaman scored the biggest opening weekend ever back in 2006. Despite Los Angeles blackouts causing theaters to offer refunds and shut down, Aquaman beat Spider-Man's at-the-time record with just over $116 million! So, what did Vince, E, Turtle, and Drama do? They partied with some high school kids and gave away a Maserati.

When it came time for Aquaman 2, Vince bailed. He decided to do his "Medellin" passion project in Colombia rather than stay on the franchise and got replaced by Toby Maguire. James Cameron also left the franchise. Michael Bay took on the Kevin Smith penned sequel. Ah, the irony this show presents.

Do you wish you could watch Vincent Chase and James Cameron's version of Aquman?