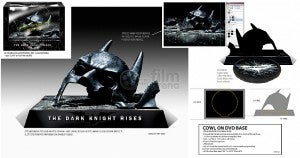 Given all of the additional material that's been hinted at during interviews and in The Dark Knight Trilogy: The Complete Screenplays with Storyboards paperback available in bookstores, fans have suspected for a while now that there may be a director's cut in the offing for Christopher Nolan's third and final Batman film, The Dark Knight Rises, when it comes to DVD and Blu-ray on November 30. Now it seems as though Nuke The Fridge has confirmed that suspicion. "Sources have informed Nuke the Fridge that not only is a Director's Cut being developed by Warner Bros. for The Dark Knight Rises, but it's going to include Bane's origin plus a bit more screentime for Ra's Al Ghul (Liam Neeson) which were omitted from the current theatrical cut of the movie," the site says. Bane's origin was discussed in a GQ interview with costume designer Lindy Hemming, in which Hemming implied that the scene was cut very late in the editing process and it wasn't clear to some of  the crew whether the scene had made it or not. Although even NTF is skeptical of the report, they report that "So now according to our reliable spies, we will be able to see how Bane learns to fight plus more scenes involving Ra's Al Ghul. The new Director's Cut is said to make the film about thirty minutes longer." Rumored packaging for a special edition of the Blu-ray can be seen at left, probably for Target, who had an exclusive Bat-cowl package for one of Nolan's previous films.

Report: The Dark Knight Rises To Get Director's Cut on Blu-Ray