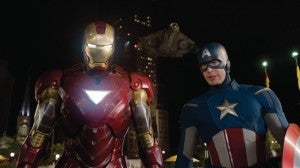 With only days to go before the highly-anticipated U.S. release of Joss Whedon's adaptation of Marvel Comics' The Avengers, the embargo has been lifted and the American press can now tell you what the international press has been able to say for more than a week: This is a really, really good movie. Not "a really good superhero movie," either. In spite of a few flaws, it's a terrific piece of filmmaking. This is not the "best superhero movie ever," as so many early reviews were eager to claim. But it is the one that's likely to be a lot of people's favorite. The movie is undeniably awesome; it's packed wall-to-wall with so many "hell yeah!" moments that they often obscure the paper-thin plot. That may sound harsh, but it isn't; that's more or less the premise of any mainstream American action film since Die Hard. In a nutshell, it's an incredibly fun movie, with a strong script, great special effects and compelling characters--but it's unlikely to be one that will stick with you long after you've left the theater. The tone, look and feel of the film is pitch-perfect, and it's a testament to Whedon's eye as a filmmaker. It's not the widescreen, panoramic wonderment of The Lord of the Rings, but closer to The Matrix in terms of a clean look, occasional mood lighting and eighty inches of action crammed into every forty inches of film. It "fits" comic book characters so well that this movie has to be more or less what Ang Lee was going for when he made his hideously misguided Hulk film. 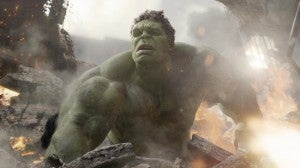 After months of speculation and conspiracy theories, the identity of Loki's mysterious alien army is literally revealed in the first two minutes of the film, through expository dialog. As has been reported before, though, the identity of the aliens is all but irrelevant; they're really just "invaders," whose culture and abilities aren't manifested in the film as they wander through their sequence as cannon fodder, being taken out easily by guns and arrows. There is an event, about halfway through the movie, that was designed by the writers to galvanize the team and be the turning point in the plot. It's effective as far as the characters are concerned, but for those watching it feels forced and in its wake only Robert Downey, Jr. manages to pull anything like genuine emotion out in response to this event that's supposed to have shaken all of the characters to their core. Of course, everyone wonders how, in a film like this, their favorite character was handled. Characterization is fairly good across the board, with the notable exception of Agents Fury, Coulson and Hill of S.H.I.E.L.D. Samuel L. Jackson is just Samuel L. Jackson, stomping through the movie and chewing the scenery like it's a Royale with cheese. During one of his more emotional speeches you even get the "crazy Sam Jackson eyes," except of course that one of them is covered with an eye patch. Fury is given a tribunal of faceless S.H.I.E.L.D. directors to answer to, something that doesn't sit well with him as he flaunts their orders and does what he thinks is right throughout the film. It all feels like setup for something to come in a later movie, as they do little to enhance the plot, other than a failed Hail Mary pass to stop the alien invasion that only really ends up hurting one of the Avengers. 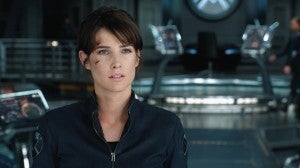 Hill is unnecessary. The scene that was screened during actress Cobie Smulders' appearance on Letterman is really just about all they gave Smulders to do in terms of actual acting, and her brief conflict with Fury regarding the way he runs the show is not a dominant subplot. Indeed, her reservations appear to melt away throughout the course of the movie. Coulson gets some great scenes early (Clark Gregg's interactions with Robert Downey Jr.'s Tony Stark remain some of the best banter in the Marvel Cinematic Universe) and he definitely sticks the landing on his last line of the film...but in between they play the "star-struck kid" who loved Captain Americagrowing up for one too many laughs and end up leaving Gregg with little to work with as his fan-favorite character descends into silliness. Thor is more or less a prop; his characterization is basically non-existent and his main purpose in the film seems to be to set up some (admittedly badass) fight scenes. However, his "god of thunder" powers are used to much better effect here than they were in his own film, leaving this reviewer wondering if it might be to Marvel's advantage to have Whedon act as a script doctor on Thor 2. And to say that he's treated as a plot device rather than a character is not to say that he's mischaracterized or treated badly. He even gets a couple of good lines--he just feels like he's always there in service of the story, rather than for his own reasons. Captain America and The Hulk are undoubtedly the stars of the show, although Iron Man—the Marvel movie universe's brightest star—gets many of the best lines and a good deal of camera time (including bookends toward the beginning and end of the film with his leading lady, Gwyneth Paltrow's leggy Pepper Potts, who somehow manages to wear an outfit you'd be more ashamed to be seen in on the street than Captain America's. 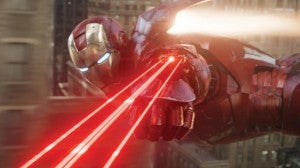 Speaking of which, Cap's notoriously ugly costume doesn't look any better in action than it does in still images. With a little luck, the next film will reinvent it again. He, however, gets some of the best writing of the film in terms of remaining true to what makes him tick. The Hulk also gets a good shake, but frankly there's nothing particularly new there. Plus/minus a great performance by Ruffalo and a terrific moment in the final battle, the Hulk is more or less the same Hulk we've seen before. Captain America, though, has transitioned nicely from being the one-man army he was in Captain America: The First Avenger to the symbolic champion that comic book fans know him as. He's the moral compass—the Superman, in a lot of ways—of the Marvel Universe, whose role is as much to inspire as it is to protect--and star Chris Evans carries it off impressively. A brief cameo by the talented Ashley Johnson—most recently seen in The Killing and The Help—as a harried waitress saved by Cap on the streets of New York drives home nicely the way he's perceived by the public, even as the other Avengers are viewed with some degree of suspicion. Fans who wondered what purpose Hawkeye and Black Widow could serve in a film where everyone else is able to do amazing things will have their answer; they ground the team in humanity and have some very quiet, genuine, character-driven moments (as well as some plot contrivances to justify why they're to be feared). They certainly add something to the film, but it's largely flavor, not substance, and it feels like almost every scene featuring the pair could be edited out to shave down the movie's long runtime. Tom Hiddleston's Loki, meanwhile, is a high point of the film. The depiction is not only nuanced and smart, but a perfect continuation of what he managed in Thor. Some credit for this has to go to the writers, of course, but it's Hiddleston's recent interviews (including one that will run tomorrow morning here at ComicBook.com) which has informed my opinion that he's driving a lot of the way Loki is perceived in the film. He's not a totally irredeemable thug, after all--he's a petulant child with too much power and no idea what to do with it. He's a damaged little man, desperate for attention and acceptance, who finds himself in a position where he believes he can force the entire world to love him. That aforementioned opening monologue also feels fairly unnecessary. Everything said in that sequence is later reiterated by Thor, and one has to wonder if the monologue was primarily the result of a meddling studio executive saying that this is going to be the biggest movie of the year, and possibly the highest-grossing in Disney's history...and that they can't afford to wait the half an hour or more until Thor shows up for the audience to find out what's going on. It seems the audience has been underestimated, though, because it was frankly more confusing to see that monologue go without follow-up for so long than it would have been to wait for answers. Much has been made of the after-credits sequence that teases what's next to come, and it is of course worthy of note, since it seems likely to set up an Avengers sequel and likely will color everything that comes between now and then. Nobody has really talked, however, about Downey's last scene with Paltrow, which sets up a new status quo for the team and establishes one of the Marvel Universe's most beloved settings to boot. It's a nice little scene, and could stand on its own as the movie's finale if not for the studio's well-documented pattern of crafting these terrific teasers after the credits. All of these minor quibbles are not to poke holes in what is undoubtedly a fine film, hugely entertaining and chock-a-block with comic book fan wish fulfillment. They're merely to say that it isn't perfect. It is, like the team at its core, a very slightly flawed gem that gets better as it goes.