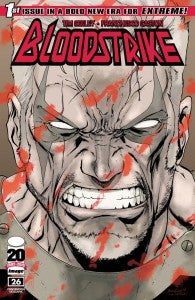 , the team of super-powered government assassins currently being written by Tim Seeley for the relaunched Extreme Studios, is headed to Hollywood, according to Variety. The series, created in 1993, has published only occasionally since, starting as an ongoing and then being demoted to a miniseries and finally to backups in Supreme comics before disappearing completely. In the hopes of reinvigorating the franchise, Variety reports that Liefeld is pitching the series as a team of super-soldiers genetically enhanced with vampire blood. Variety referred to the team as "vampire soldiers," but Liefeld tweeted a correction in response to a fan inquiry, saying, "Variety said vampires, should say, Undead. No harm, no foul." Liefeld will produce the film, along with Adi Shankar, whose 1984 Private Defense Contractors are the ones financing it, and Brooklyn Weaver, Liefeld's agent, who served as a producer on Out of the Furnace (starring Christian Bale and Ellen Page).