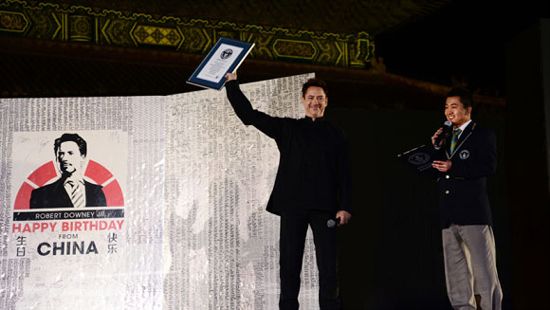 At an Iron Man 3 premiere event in Beijing, China, Robert Downey Jr. received a world record-breaking birthday card. According to the Guinness Book Of World Records, Robert Downey Jr. received a birthday card featuring 5,339 fans signatures, which set a new world record for the most contributions to a greeting card. Surprisingly, the previous world record was only 4,437 signatures, which was achieved by Churchill Insurance (UK) in October 2012. We're surprised that the number actually wasn't much higher, as this seems like a record that could be easily broken by passing around a large greeting card at a concert. Robert Downey Jr. turned 48 years old on April 4, 2013. At his belated birthday celebration in Beijing, Robert Downey Jr. was presented with a Guinness World Records certificate confirming that the birthday card had set a new world record. After receiving the certificate, Robert Downey Jr. said, "I collect modern arts and I consider this the most recent addition to my collection. Thank you China for this amazing display of the culture and thank you for making me feel so welcome. This is unforgettable".