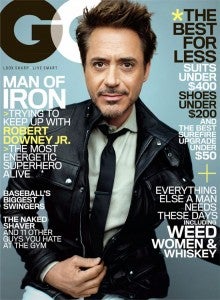 While it's long been rumored that Robert Downey Jr. got a huge payday from The Avengers, the actor has now confirmed just how much he received. In an interview in the May issue of GQ, Robert Downey Jr. is asked if the $50 million figure that The Hollywood Reporter suggested that he made for The Avengers was accurate. While Robert Downey Jr. has previously kept quiet about the amount in interviews, he confirmed it to GQ by telling them "Yeah" with a big smile. Robert Downey Jr. Also added, "Isn't that crazy? They're so pissed. I can't believe it. I'm what's known as 'a strategic cost.'" Reportedly, Robert Downey Jr.'s contract gives him 5 percent to 7 percent of the revenue from movies in which he plays Iron Man. With Iron Man 3 set to be released in a couple week, Robert Downey Jr. will likely be getting another huge paycheck from Disney.

Robert Downey Jr. Made $50 Million From The Avengers