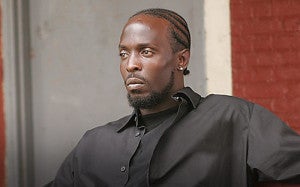 Filmmaker Spike Lee announced today to the Kickstarter backers for his as-yet-untitled next film that The Wire and Boardwalk Empire star Michael Kenneth Williams has joined the movie's cast. The actor, who played a professor on NBC's geek-friendly sitcom Community, will appear in next year's remake of RoboCop as Officer Jack Lewis, Alex Murphy's partner before he becomes RoboCop. "I feel that his portrayal, his complexity and his humanity of Omar will go down as one of the greatest characters cable TV has seen," Lee wrote of Williams's most famous role. "Omar in The Wire was not the usual bland, black, ghetto, street thug we've seen 8 million times. Nah, Son, this was some totally new sh*t." Lee's film, which recently hit its $1.25 million funding goal on Kickstarter, revolves around people who are "addicted to blood," Lee has said, and not much else, other than a half-joking note that the movie is not a remake of Blacula. With 18 hours to go, the controversial crowd-funding campaign has generated $1.36 million in pledges. The movie will also star Stephen Tyrone Williams and Zaraah Abrahams.