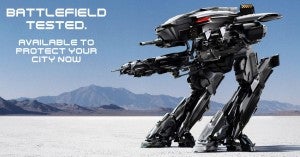 While real-world police organizations are dealing with questions about their use of unmanned drones to patrol U.S. cities, OmniCorp--the corporation who run...well, lots of things...in the world of RoboCop--have some even more controversial technology they're ready to deploy--and now there's a site up and running to promote it. So far, there's no sign of the actual RoboCop yet but we've got ED-209 and XT-908 crowd control units. ED-209 is just an updated, more Transformers-inspired version of its previous incarnation from the original RoboCop movies. XT-908, which boasts 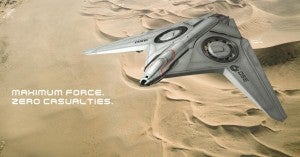 "Maximum force, zero casualties," appears to be an airborne unit that presumably is either a drone observer or perhaps the next step in that technology--something to deploy pepper spray, tear gas and the like. These are the only two items fully visible at this point, but in their "projects in development" features something called the "RC-2000," which presumably is the official project designation of the RoboCop prototype which--as you'd guess--is kind of a big deal in the movie. 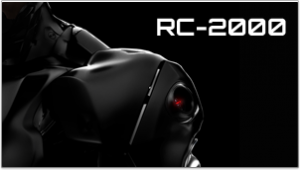 Creating a viral site tied to the fictional corporation in movies is getting to be a more and more popular way of conducting a viral campaign--it allows filmmakers an opportunity to give fans a peek into the world of the movie without necessarily giving anything specific away as it regards the characters themselves. Prometheus used a viral site for the fictional Weyland Corporation and The Amazing Spider-Man did most of its pre-release promotion through the Oscorp site. Here, we see not only some of the technology from OmniCorp, but--in these videos captured and put online by Bleeding Cool--a bit of a look at the background of the world and the tone and tenor of the film, including some of what's being carried over from the original RoboCop, which featured news footage heavily in what was not only a way to communicate information to the viewers but also a commentary on the media. Given the fact that many of the things the original filmmakers were critical of have only become more prevalent in the media since, it's the kind of thing most had been assuming director José Padhila would follow through on. RoboCop will be in theaters August 9, 2013.