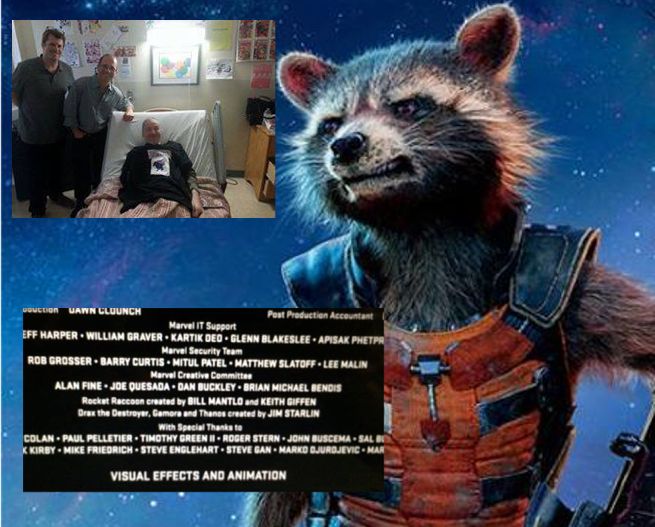 Rocket Raccoon is one of the big stars of Guardians of the Galaxy, a film which just had the highest grossing opening weekend ever in August. Rocket Raccoon was co-created by Bill Mantlo and Keith Giffen. Unfortunately, Bill Mantlo was the victim of a hit and run driver back in 1992, which left him with a traumatic brain injury and in need of ongoing medical care.

Comic book writer Greg Pak recently spoke out to raise awareness about Mantlo's situation and to help raise money for his ongoing care.

According to Bill's brother Michael Mantlo, Bill's relationship with Marvel is excellent, and they have been compensating Bill for his creation. In fact, Michael posted a couple of hours ago to Facebook that Marvel arranged for Bill to have a private screening of Guardians of the Galaxy. Here's what Michael had to say.

*****WHAT AN INCREDIBLE DAY FOR BILL MANTLO*****! Marvel hooked Bill up with a PRIVATE VIEWING of Guardians Of The Galaxy, and my wife Liz and my beloved cousin Jean assisted Bill throughout, enabling him to sit back, relax and relish in the AWESOMENESS of what is going to be, in my humble opinion, Marvel's GREATEST AND MOST SUCCESSFUL FILM EVER! Bill thoroughly enjoyed it, giving it his HIGHEST COMPLIMENT (the BIG "THUMB'S UP!"), and when the credits rolled, his face was locked into the HUGEST SMILE I HAVE EVER SEEN HIM WEAR (along with one or two tears of joy)! This was the GREATEST DAY OF THE LAST 22 YEARS for me, our family, and most importantly, BILL MANTLO!

The gentlemen that made it possible for Bill to see his creation, ROCKET RACCOON, come alive in Guardians Of The Galaxy, Marvel Attorney David Althoff (far left) and Marvel VP David Bogart (center). Giving Bill this opportunity was a daunting challenge (with all the legal & security protocols that needed to be breached), but these two FINE MEN made it happen, and Bill had the HAPPIEST DAY OF HIS LIFE! I will NEVER be able to thank them enough for all that they have done for Bill!

Rocket Raccoon Co-Creator Bill Mantlo Gets Private Screening Of Guardians Of The Galaxy, Gives It Thumbs Up