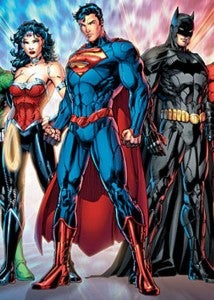 We're going to label this report as rumor, but we've heard it from more than one source. The issue though appears to be that things are a little in flux, because the directors and actors that Warner Bros. wants have other things on their schedules that have to be coordinated. We've heard a couple different paths for the launch of the DC Cinematic Universe. The one thing everyone seems to be agreeing on is that a Man Of Steel sequel is being fast tracked as next. All the key principals are already under contract, so Warner Bros. is planning to have the Man Of Steel sequel in theaters by at least summer 2015, maybe earlier. One thing that seems to be more up in the air is that we've also heard murmurings that the next solo superhero movie being developed either after or concurrently with Man Of Steel is Wonder Woman. There seems to be disagreement from sources on this one. However, it does make sense from the perspective that Wonder Woman is Warner Bros. most well-known DC Comics character that hasn't been developed into a movie. Rumor is Wonder Woman would also be targeted for a 2015 release, dependent on the desired participants being signed. Another movie we've heard that is on Warner Bros. schedule is what is usually being referred to as Justice League Dark, even though the official name will likely be something else. On this one, word is everything is dependent on Guilermo Del Toro's schedule, as he's the guy Warner Bros. wants to direct. We haven't heard a firm date on this one, even though some have said it will come right after Man Of Steel 2. Odds are a lot depends on how Pacific Rim does, because if Pacific Rim is a huge hit then a Pacific Rim sequel will likely get fast tracked as a priority. There's also definite talk of a Batman reboot, but dissenting opinions on if it will come before or after Justice League. We're mostly hearing after Justice League, but things are always subject to change. It's possible that Batman will be released in the same year as Justice League if Warner Bros. adopts a two comic book films a year strategy similar to Marvel Studios. Here's the rundown of what we're hearing is the foreseeable future of the DC Comics Cinematic Universe. DC Comics Cinematic Universe Plan Man Of Steel 2 – Summer 2015 Wonder Woman – 2015 Justice League Dark – Unknown Justice League – 2016 or 2017 Batman Reboot – 2016 or 2017