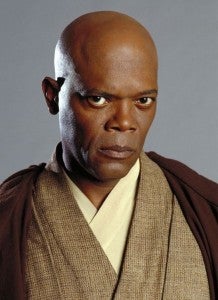 While some actors seem to be avoiding the Star Wars Episode VII question, Samuel L. Jackson is not shy about voicing where he stands. On Wednesday night's Late Show with David Letterman, Samuel L. Jackson shared his desire to be a part of Star Wars Episode VII. He also revealed that a couple of fellow Star Wars actors had indicated that they hadn't been called yet either for a role. "After I left Germany, I actually went to London and started another film. And I'm in the film with Mark Hamill," said Jackson. "So I asked Mark if he had heard from J.J. Abrams, and he said, 'No.'" Jackson said Ewan McGregor was also in London, and Jackson asked him if he was there doing Star War, but Ewan said, "No, they didn't call me." Jackson said he was thinking that all three of them should get together and just go over to the Star Wars set one day and stand around to see if they could use some old Jedi. When Jackson heard on TV they were auditioning people for Star Wars, he said that maybe they should just go to the audition and try to get a job. Jackson even hinted to J.J. Abrams at George Lucas' wedding that he wanted to be in the film, but he didn't get much of a response.