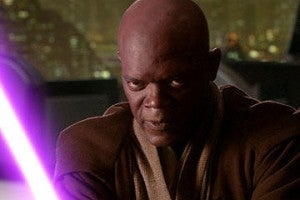 It's probably pretty obvious, considering there isn't a whole lot of room for U.S. Government intervention in deep space, but Samuel L. Jackson, who plays Nick Fury in the Marvel Cinematic Universe films, has confirmed for Movies.com that he will not appear in Guardians of the Galaxy, skipping right from Captain America: The Winter Soldier to Marvel's currently-untitled sequel to The Avengers. The actor, who said he has "three or four" more Marvel Studios films on his contract, also reiterated his interest in reprising his role as Mace Windu in Star Wars Episode VII and in Marvel's S.H.I.E.L.D. "Oldboy is done, that's finished. I still have to do RoboCop, and go to Toronto in January. After that I'm doing this live-action version of Kite, the Japanese anime film. So I'm doing a live-action version of that in Johannesburg. And then I do... [Captain America: The Winter Soldier]," Jackson told the site. When asked whether Guardians of the Galaxy was in his future, he clarified, "No, Cap 2, then nothing until The Avengers 2, but that's in 2014. Hopefully they'll throw me another Star Wars movie." And, yeah, he really wants to be in the next Star Wars. Speaking with The Huffington Post, Jackson said, "I told George that. Look, you don't have to give me a part. All I need to do is put on one of those white f---ing Stormtrooper outfits and run across the screen. And I'll know that I'm in it. Nobody needs to know -- I don't care. I just want to say, "I'm in that s--t." I don't have to have a credit. I don't have to have anything. I'll know!" He added, when pressed whether a dead character can logically just pop back up four episodes later, "He just went out the window. He's a Jedi! He could have landed on a ledge." He also added that, like Anakin Skywalker did during Star Wars Episode III: Revenge of the Sith, he could simply have landed on a speeder. "I love Nick Fury. We have done that [with the cursing]. In between takes, they'll say 'Do it the way you do it,' and I just go, 'Let's go kill these motherf--kers!' They just fall on the floor laughing," Jackson told Movies.com.