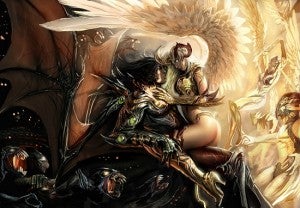 Move aside, Marvel Studios! At today's Top Cow panel at San Diego Comic-Con International, Marc Silvestri, Matt Hawkins and company made not one, not two, but five announcements regarding Top Cow properties headed to film in the near future. Granted, most of them were mentioned almost in-passing, and may be early in development, but that's still a crazy number for one panel. Ranging from established Top Cow properties being developed as big-budget feature films to independent movies based on brand new intellectual properties, Top Cow is clearly moving from a traditional comic book publisher to a full-fledged multimedia entertainment company, bolstered by their relationships with MTV and Thrillbent. So, what were the announcements? Check 'em out... The Darkness has a writer Producer David Manpearl, who's connected to The Darkness adaptation, surprised fans by appearing at the panel to remind them that the film is still humming along, and that they've got a screenwriter: Len Wiseman, best known for the vampire actioner Underworld, whose new remake of Total Recall will be in theaters soon. The producer, who has appeared with Top Cow at Comic-Con for years, told the audience that they're committed to a film adaptation that will do the series justice. Manifestations to be a Digital-First Graphic Novel...And a Movie! Manifestations is a new, original graphic novel that will be available digitally soon for $4.99. The book, by Rafaelle Ienco, will also be simultaneously released as an independent film. No additional details were announced at the panel, but we'll try talking them into letting us know something soon! Tracker finding its way to cinemas Tracker–the Atlas Comics book by Jonathan Lincoln and Francis Teal-is being developed as a film and will be going to studios soon. The story will be the second indie comic about werewolves to be developed as a film property in a pretty short period of time, following the recent announcement that Archaia's Feeding Ground is on its way to theaters. 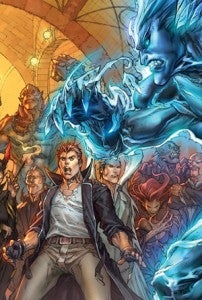 Epoch, executive produced by Ron Howard Epoch was announced as a title that will be coming to film by Imagine Entertainment (home of Ron Howard) in cooperation with Top Cow and Heroes & Villains. The series, by Kevin McCarthy, with art by Paolo Pantalena, debuted at last year's San Diego Comic-Con. Not much more information was available at the time of press, but we're looking forward to hearing what's coming next. Bushido: Way of the Warrior Coming Soon Bushido: Way of the Warrior, is coming soon from Top Cow and Heroes & Villains. The series will (a bit like Image Comics' Shinku by Ron Marz and Lee Moder) be a comic about samurai fighting vampires in feudal Japan. The film is being co-developed as a feature film produced by Adam Stone. "I love the guys at Top Cow and have been looking for something to do with them for a long time," Stone said, "and the Heroes & Villains guys finally brought me the right one."