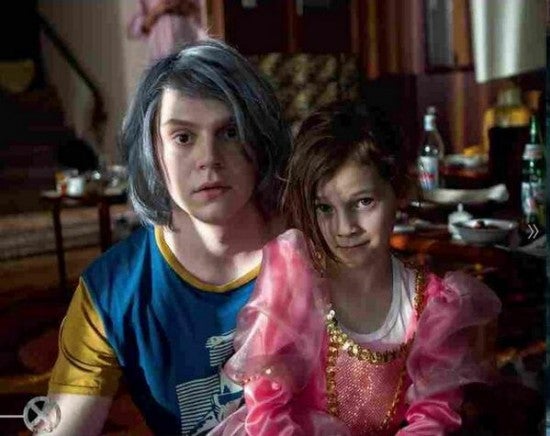 In one of a number of new, low-quality photos scanned by fans out of an Empire magazine and posted online, X-Men: Days of Future Past appears to have given fans their first look at Wanda Maximoff, the girl who will grow up to be the Scarlet Witch. The photo seems to be a picture of a pre-Quicksilver Pietro Maximoff, taken at home with a young, red-haired girl...likely his sister. Since Wanda and Pietro usually come as a package deal (as they will in 2015's Avengers: Age of Ultron), it's been a confusing choice for many fans that Bryan Singer would bring in Quicksilver without Scarlet Witch. No reason had been given yet, except an unsubstantiated rumor that Quicksilver was needed for a big action sequence, which seems unlikely since it would be cheaper and easier to rewrite such a sequence than cast a whole new actor and create the character's effects. The characters exist in a kind of legal no man's land, where both Marvel and Fox can claim ownership of their movie rights, because of their involvement with both the X-Men and The Avengers over a very long period of time, and the fact that no specific "side" was chosen for the characters when the rights were divided up for Fox's X-Men license. In Avengers 2, the characters will be played by Kick-Ass star Aaron Taylor-Johnson and Godzilla's Elizabeth Olsen. In X-Men: Days of Future Past, Quicksilver will be Kick-Ass's Evan Peters. So far, it's not clear whether this unnamed, young actress had a supporting role in Godzilla.