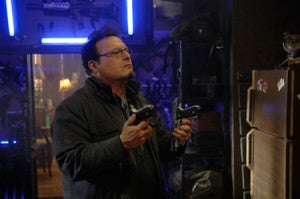 One of the fun, weird pieces of conversation that we had this summer that never quite made it into print was a conversation we had at San Diego Comic Con International with Seinfeld's Newman--Wayne Knight, currently starring on TV Land's The Exes. Knight, who also appeared as Dennis Nedry in Jurassic Park, was there as part of the TV Land Legends of Comedy panel along with Roseanne Barr (who wants to be in Avengers: Age of Ultron) and William Shatner (who of course wants to be in Star Wars Episode VII). And as the summer winds down and we were looking back through some of our archives, we realized that not only did we not share the highlights of the Knight conversation, but a Google search suggests that nobody in the room (it was a press roundtable interview) touched on what a fanboy Knight really was--and his secret dream of being Namor. We kid. "I loved sci-fi, I read comic books and I grew up in a small town in Georgia," Knight said. "My father would take me to the comic book store and I bought comics for the transition between ten cents and twelve cents. It was like, 'I can only buy four of these now! I used to buy five!' So that's when I started hooking." "I started out in the DC Universe but then I realized that life was more complicated than that," Knight said when asked what his favorite comics were. "Then I kind of got into the Marvel Universe and then later my friend took me to the Dark Horse and Valiant Universes and other places." He noted that he never wanted to actually be a collector, which is what prevented him buying and reading more comics. Asked, though, whether there was a comic book character he'd like to play, the actor hesitated. 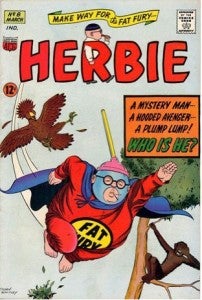 "I've never really--because growing up a kind of a truculent fat guy, there's not necessarily a lot of those characters unless you go to The Penguin or somebody like that. Where do you find those people? There was actually a comic book character called Herbie, that had a lollipop that allowed him to fly. And it never really took off." He did, however, play Micro in Punisher: War Zone, "which was repudiated by fandom," the actor admitted. "As I was making it, they were like, 'No!'" He noted that in Star Trek, the expendable redshirts were often comic relief and "the jokey guy dies! Maybe sci-fi isn't the world for me." Of course, that didn't stop him from doing Torchwood, and that his first Doctor when he got into Doctor Who was Christopher Eccleston. Asked whether he was excited to see Eccleston in Thor: The Dark World, he had some thoughts about the Marvel Universe... "Thor was never my favorite," Knight admitted. "Asgard was never...I feel like if you're in one universe of comicdom, like Prince Namor of Atlantis never was my big thing. I like a straightforward kind of, 'I fly, I hit thing...' So 'I think lofty thoughts and I go to some Norse land or swim under the water--no! It's just not me." "So you're not up for the Sub-Mariner movie?" joked a reporter. "It's got to be somebody who really is built to play the Sub-Mariner," Knight admitted, "but he also has that ethereal, Thor-like worldview. Aquaman, maybe, but Aquaman...meh. The uniform wouldn't play for me. The orange, I think--orange, underwater? Orange looks like s--t."