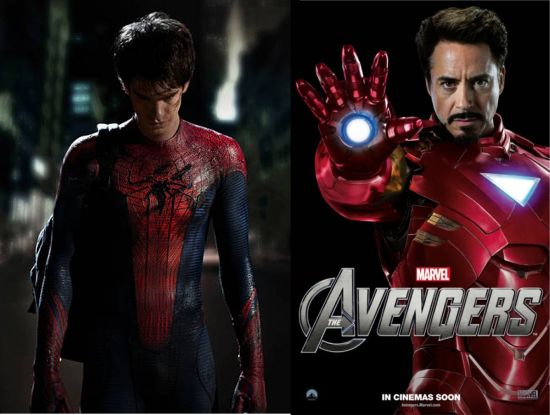 Forgive us if we've just given away a major spoiler for the upcoming Avengers movie, but we imagine what we've actually revealed is a mistaken reference in an article that raises up an interesting possibility. The Radio Times just published an interview with Jenny Agutter, who is playing a role described as council member in The Avengers movie. Sci-Fi fans might best remember Jenny Agutter for her role in the classic Logan's Run. When asked about her role in The Avengers, Radio Times quotes Agutter as saying, "I'm sworn to secrecy! I wasn't allowed a script until I got there, and when I did, I felt like a complete child being on big sets and a huge parking lot full of Winnebagos." Radio Times then goes on to report, "she does let slip that two of these housed Spider-Man and Iron Man." Say what? Everyone knows that Iron Man is in The Avengers, but Spider-Man? Comicbookmovie.com posted the excerpt about The Avengers from The Radio Times, and fans immediately started commenting on the Spider-Man reference. While comic book fans love to speculate on crossovers in various superhero movies, as evidenced by the intense interest over the possibility of Superman appearing in The Dark Knight Rises, the topic of Spider-Man appearing in The Avengers hasn't even come up on the radar before. Because Sony/Columbia owns the movie rights to Spider-Man, while the Avengers characters fall under Disney/Marvel Studios, everyone has been assuming they operate in different universes. But Sony/Columbia is trying to relaunch the Spider-Man franchise in July of 2012, wouldn't a Spider-Man cameo in an Avengers movie that premieres in May of 2012 be the ultimate way to drive buzz? While a Spider-Man cameo is an awesome idea, odds are the reference to Spider-Man is just either an actress or a writer getting their superheroes mixed up. If Spider-Man does have a brief cameo in The Avengers, then it's unlikely that Andrew Garfield would have been there long enough to have his own Winnebago. It would likely have been one of those things where he was flown in for just a day to do a very brief cameo appearance. Still, it will be really awesome if it does turn out to be true.

Spider-Man To Appear In The Avengers Movie?