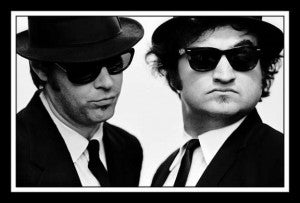 Apparently, Jake and Elwood Blues' "mission from God" almost took them to a galaxy far, far away. In the premiere episode of Kevin Smith's new Hulu show Spoilers, released today, guest Carrie Fisher shared a great deal of information about her time as Princess Leia, and spoke briefly with Smith about her drug-fueled experiences on the set of the 1978 John Landis classic The Blues Brothers, in which Dan Aykroyd starred with Fisher's friend and onscreen ex, John Belushi. "We were similar types," she said of Belushi, and then added, "Too many village idiots spoil the village." It was a little later on, though, after Smith joked about the effects of using drugs white filming scenes from Star Wars featuring muppets and creatures and men in strange costumes, that Fisher revealed something pretty cool. Belushi, she revealed, would call her after The Blues Brothers wrapped and beg her to persuade George Lucas to cast he and Aykroyd in The Empire Strikes Back. "He thought that Empire would have another scene where there would be the [Mos Eisley Cantina]...begging me to get him in there." The actress said that she actually did approach Lucas about casting the Blues Brothers as extras, but that she was rejected outright. "John was not somebody you could just kind of throw into a scene," Fisher explained. "He was a focus-puller. You were going to look at John wherever he was."\ (It's true--when Joliet Jake Blues appeared in Ghostbusters #1 last year, it was a big part of many reviews and write-ups of the issue!) Lucas, apparently, didn't want the distraction. It makes sense, because Star Wars was all about world-building and likely wouldn't have worked as well if you suddenly said, "Holy crap, it's the Blues Brothers!" in the middle of a scene. Still, it's hard to argue that it wouldn't have been awesome.

Spoilers: John Belushi Wanted to be in The Empire Strikes Back