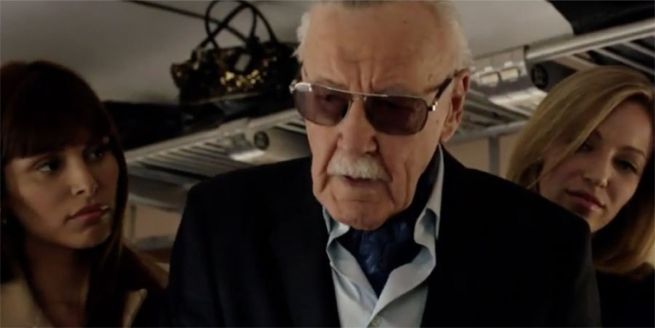 By now, most have heard the story of how director James Gunn initially had a different idea for Stan Lee's cameo in Guardians of the Galaxy. In the initial version of Lee's cameo, Lee was inside one of the display cases at The Collector's museum, and he flipped off Groot when Groot looked in at him.

Because there was already a scene in Guardians of the Galaxy where Star-Lord flipped off the Nova Corps, Gunn ultimately decided to go with a different take on Lee's cameo. At the Salt Lake Comic Con this weekend, Lee was asked if he would recreate the original scene and flip off a member of the audience. However, one of Lee's assistants came over, and Lee said they told him that he wasn't allowed to do that. Then, Lee revealed a secret about his actual cameo.

"But I'll tell you one thing. They edited the cameo that I did do," said Lee. "Because in the cameo…and I'm glad they did, because my wife would have been angry if they had kept it in…in the cameo, I'm standing with a beautiful girl, they had me talking to her, and I'm saying the equivalent of why don't you come up to my apartment and I'll show you my etchings. It was that type of thing."

Lee added, "And she's saying, 'Well, I don't think I ought to.' And I'm saying, 'Oh, that's ok, you'll be fine, come on up to my apartment.' It's kind of stupid. And they cut all of that out, and they just had me standing with her, which I kind of liked a little better than the dumb lines they were giving me. But now you know the inside story of how these cameos work out."