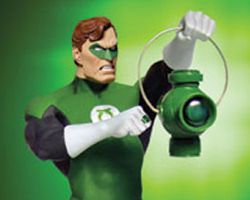 In an interview with MTV News, Chris Pine discussed the rumors about him being cast as the newest member of the Green Lantern Corps. Though he has been approached about the role, the actor has yet to be officially offered the role of Hal Jordan in a forthcoming live action Green Lantern movie. "No, I had a meeting with [casting director] Pam Dixon and [executive producer] Donald De Line, but a meeting was all it was," Pine told MTV News. "I have not been offered squat. I do not have the part and haven't read a script." Rumors that Pine had been offered the role were posted last month on MTV's Splash Page. Pine is not the only actor whose name has been tossed around as a possible contender for the role of Green Lantern. Mad Men's Jon Hamm, Firefly's Nathan Fillion, and actor Sam Worthington have also been rumored to star in the film. Chris Pine is hoping to become a household name in his next project, the reboot of the Star Trek franchise. Star Trek has the actor taking the captain's chair from the legendary William Shatner. Pine plays a much younger version of James T. Kirk, with Heroes star Zachary Quinto donning the pointy ears to portray Spock. Star Trek hits theatres May 8th.