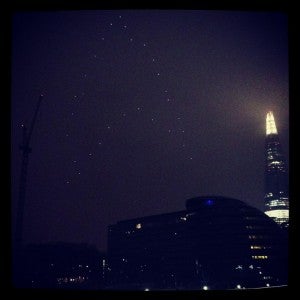 Paramount Pictures has released a new video in support of the Star Trek Into Darkness light show being put on to celebrate the World Wildlife Fund's Earth Hour event in the U.K. The light show was presented by Paramount, in conjunction with Ars Electonica Futurelab & Ascending Technologies, saw quadrocopters fly into the night sky, forming the Star Trek federation logo beside Tower Bridge on a scale never seen before. The event coincided with WWF's Earth Hour at 8:30 pm. Along with key landmarks such as Big Ben, the Houses of Parliament, and The London Eye going dark, the quadrocopters turned off their glow in support of Earth Hour. To signal the end of Earth Hour at 9:30 pm the quadrocopters reformed the Star Trek logo above London's skyline. Check it out below. Star Trek Into Darkness hit theaters in May.