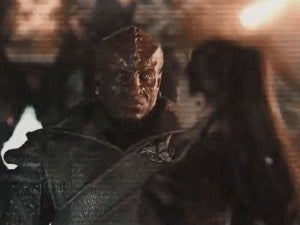 While the Star Trek Countdown To Darkness comic book offered the first artistic impression of a Klingon from J.J. Abrams' Star Trek Into Darkness, a new video has given fans the first image of an unmasked Klingon from the actual movie. The new "Disruptions" video was released by Paramount International and focuses on Uhura with a voiceover by John Harrison calling into question her relationship with Spock. The fleeting appearance of an unmasked Klingon occurs twenty-one seconds into the video. Star Trek Into Darkness is scheduled to open in movie theaters in the United States on May 17, 2013.