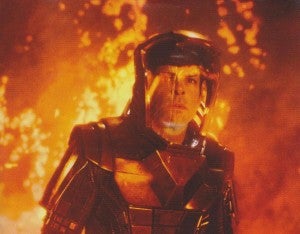 In this week's issue of Empire, which comes with variant Star Trek Into Darkness covers, they talked to members of the cast and crew about the anticipated sequel, as well as debuting a number of new images, which Trek Movie have scanned. Minor spoilers ahead, so be warned. If you want to skip past them and see the bunch of pictures that were in the story, just scroll down. In the course of the interview, among other things, it was revealed that after having spent the whole first movie building up Kirk to the point where he was worthy to take on the captain's chair of the Enterprise, apparently we're back to square one in the sequel and he'll make some bad decisions, one of which will (temporarily, we assume) cost him the captain's chair. It sounds from context as though the mistake in question is that he's manipulated into releasing the villain, John Harrison, from custody for one reason or another and then he and the crew have to spend the rest of the film trying to track him back down to fix Kirk's mistake. They also got a full transcript from the other day's Japanese press junket interviews up, as well, with Chris Pine talking about what makes him different from the previous film, and what makes the new villain different from the first one. "I'm different because I am five years older and hopefully a bit more mature and I have had many more experiences since the first film and you can only help that experiences to bear on the character you are portraying at the time. So Kirk is definitely different this time around," said Chris Pine, who plays Kirk in the films. "The most difficult aspect of this film was firstly the fact that it was a very physical film so the action sequences are very hard and very long. And then I think too, the journey that my character goes through is a very difficult one and very painful to let myself go through those experiences that Kirk goes through during the course of the film." Of course, he's not the only one going through a difficult journey, as we get new shots from the film, including yet another photo of poor Scotty (Simon Pegg) looking miserable. Seems this guy just can't catch a break this time around. And with a villain who's identified as "superhuman," it's not quite the same as last time, when just about everything came down to deep-space dogfights. "With the 3D involved it just makes it that much grander and bigger," Pine said. "And the story I think gives these characters a lot more room to expand and grow and explore. So the size of the action and the size of the characters and what they go through is a lot bigger." 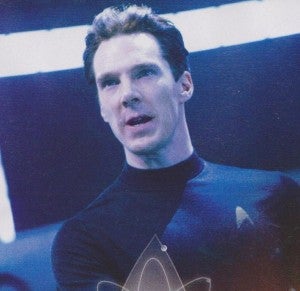 On the matter of Benedict Cumberbatch's mysterious John Harrison, Pine added, "Benedict is a great actor and portraying a really complex and layered bad guy in this film. And I think that is what really sets him apart, especially from [2009's Star Trek] where Eric Bana did a great job playing our bad guy Nero. His kind of selling point was he was a really mean, brutal, physical bad guy and Benedict plays a guy who is just as physical and just as strong but who is real weapon is the fact that he is a master manipulator and is able to use the weaknesses of the crew to his advantage and against them. A psychological force to be reckoned with." The magazine article weighs in on Cumberbatch as well, with more than just Pine having their say. The story itself refers to the character as a "Starfleet officer turned Galactic terrorist" and an "ex-Starfleet employee." "He was within Starfleet and has now turned against the organization and is hell-bent on revenge," said director J.J. Abrams of the villain. "He's responsible for a very violent, horrific attack in London and then one in the States. He believes he and others were wronged and is focused on destruction. He's an incredibly brilliant strategist who is aware of various truths that Kirk is not privy to." Added Pine, "He is Kirk's shadow of death, his Achilles' heel. He is just a big mirror reflecting all of Kirk's insecurities back at him. He is just as intelligent and logical as Spock, but is also one very bad motherf—er." And as for Cumberbatch, who at this point is pretty good at articulating information about his character without giving much away? He says, "He's sort of superhuman, pretty much unbeatable. Brainy and brawny. He manipulates situations. He's incarcerated when Kirk is talking to him and yet he still gets Kirk to do his work for him. He pushes him into a corner where the only route to salvation is cooperation. There is a real Hannibal Lecter quality to him." There are a whole bunch of new questions scanned below; click on the thumbnail to see the full-sized version. [gallery link="file" order="DESC" columns="2" orderby="title"]