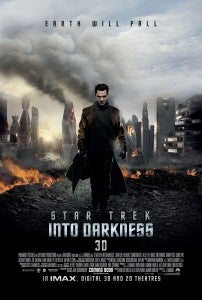 Okay, John Harrison--if that's even your real name!--it's time to shine in your own Star Trek Into Darkness character poster. So...yeah. Stand there! In the shattered ashes of London! "Earth will fall," says the caption, reinforcing the idea of Harrison as a destructive force rather than a political one--something that's not always been clear in the ads. American fans can get tickets for the film, which is coming up in just over a month, via the Star Trek Into Darkness app and U.K. fans not particularly offended by this breach of their sovereignty will be able to pre-order them as well, starting tomorrow.