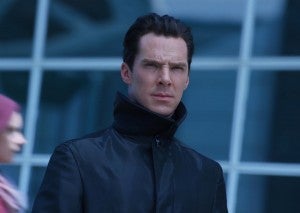 We've lost track of how many times it's been "definitively" claimed that Benedict Cumberbatch's villain, John Harrison, in the forthcoming sequel Star Trek Into Darkness is actually notorious Star Trek villain Khan. But the fact that the filmmakers and actors behind the film reject that theory, while virtually every fan online believes it, means that every time a seemingly-credible source makes a claim in one direction or another, the Internet buzzes about it for a day or two and then calms down. The sources of the information have ranged from unsourced blogs to gaffes by the film's stars. This time, it's the entertainment blog Shockya, who aren't generally known for going off half-cocked with something like this but who are also not such a major news outlet that it's immediately clear they would have particularly more access than anybody else. "Well moviegoers, through a trusted source, I can confirm that the Cumberbatch IS indeed playing Khan," claims the blog. "He is called John Harrison at points in the film, but during a key scene where Harrison is held prisoner on the Enterprise, he does reveal to Kirk and crew that his true identity is Khan. In addition, the film takes another cue from Wrath Of Khan and alludes to the famous reactor scene, but puts a reverse spin on it." So, "Kirrrrrrrrrrrrrrrrrrk? Doesn't have the same ring. Take this one with as much salt as you'd like, but it certainly does feel like another log on an already very hot fire.

Star Trek Into Darkness: Yet Another Insider Claims It's [Spoiler]