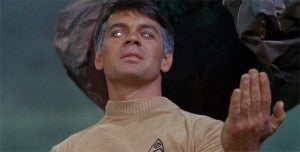 Benedict Cumberbatch has, in cooperation with the Star Trek Into Darkness writers and producers, kept fans totally in the dark so far as to the identity of his villainous, mysterious role in the upcoming science fiction epic. That said, with the release of The Hobbit: An Unexpected Journey about a week away and many IMAX prints of that film featuring a nine-minute introduction to the new Star Trek film, it doesn't seem entirely beyond the realm of possibility that we'll find out who the villain is during the fairly sizable chunk of the movie Paramount intends to tease audiences with on Friday. For that reason, it seemed an ideal time to look at the most likely candidates, beginning with Gary Mitchell. Now, filmmakers have already said that it's not Mitchell--but that doesn't mean a whole lot to the fans, who are pretty convinced that it's either him or Khan (who has also been denied). So keep all of that in mind, and go ahead and read the reasons we think he's a strong candidate: Bones already said so During the press junket for Dredd 3D, leading man Karl Urban (better known to Star Trek fans as Bones McCoy in the J.J. Abrams films)  told a reporter that villain Benedict Cumberpatch is "awesome, he's a great addition, and I think his Gary Mitchell is going to be exemplary." That interview took place after the only denial that we're aware of from the director or producers, meaning that since it was put out there to the world, nobody at Paramount has taken the time to say it isn't true. He's in the IDW comic books In Star Trek: Countdown to Darkness from IDW Publishing, fans are supposedly getting quite a bit of information about the new film - which makes sense, because the original Star Trek: Countdown miniseries was pretty riddled with clues when you look back on it. That hasn't started yet, but... Beyond the Countdown miniseries, IDW has been publishing an ongoing Star Trek series set in the Abrams universe for a while now, and word of God has it that those stories are also canon, even if they aren't "featured" in the same way as the Countdown stories are. Well, that series has already featured Gary Mitchell. Curious? There's something else here -

It looks like Spock may care about him Most of the other bad guys in Star Trek canon are a bit hard for the crew of the Enterprise to relate to, but in the case of Mitchell, he's a former friend who loses his mind after something terrible happens to him that could reasonably be extrapolated to have been avoidable by the crew. That's enough to make him someone relatable. So...is that HIS hand and not Kirk's, as we've all previously assumed, on the other side of the glass in the "looks like Spock's death" sequence? Certainly if you look at the shirt the villain is wearing below and compare both that shirt and clothing we see Kirk wearing during the ad to the hand pressed to the glass, it looks more like the villain's than Kirk's. Is it possible we're seeing either the moment, or a flashback to the moment, that Mitchell apparently died? The revenge motif In the announcement trailer, Cumberbatch references his revenge or his vengeance or his reckoning or something like that. This suggests that it's a character who will have some history with the Starfleet and/or Kirk. He seems really to be targeting Kirk, Spock and the Enterprise, but that may be just as simple as they're our main characters and so the ones we're going to see going head-to-head with him, and it's only personal on their end. But let's say it's personal for him, too. Why? Well, in the IDW series he's been introduced and killed off, with little in the way of help from the main characters. If he turned out not to be so dead, it's entirely possible that's the kind of thing you don't take kindly to. Besides that, in-canon Mitchell has had a long history of problems with Kirk, including Kirk having almost washed him out of the Academy and Mitchell being poisoned by assassins looking to get Kirk. All solid reasons to want revenge...! 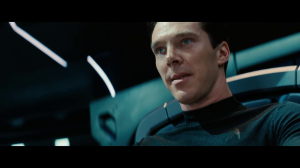 He's wearing Starfleet clothes and sitting in the captain's chair

At various different points in the trailer, the character played by Cumberbatch is seen wearing a Starfleet uniform, sitting in the captain's chair of a vessel. It's hard to tell from context what vessel he might be captaining or in what context this could be taken, but it seems an odd way to conduct oneself to blow up Starfleet and then dress in their clothes unless you've already been to the Academy and are convinced you could run the show better than the rest.