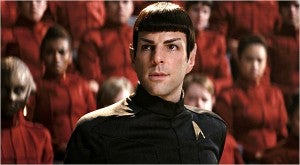 , the late night comedy show from Conan O'Brien on TBS, seems to be the place to go for all of your Star Trek Into Darkness preview needs. After director J.J. Abrams debuted just 3 frames of footage on the show, star Zachary Quinto was back there tonight, talking about the film again. "They're not fooling around, these people. There's no denying it," Quinto said of Star Trek fans. He said that the fan community had rallied around the movie, though. Asked whether it was daunting to step into Leonard Nimoy's boots, the American Horror Story star agreed that it was but said, "He's such a great guy, though, and immediately he embraced me and supported me. We've become really great friends actually. He was always there, always available and an incredible part of the process for me so I feel very lucky for him in my life now, even though we're not working together on this next one." The star then proceeded to unveil a "world exclusive" clip that...well, it's better to watch.