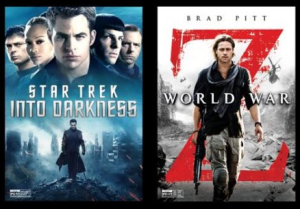 Paramount Pictures last night announced a special double feature of their big summer hits World War Z and Star Trek Into Darkness, taking place from August 30 through September 5 at select AMC Theatres, Carmike Cinemas, Marcus Theatres, Regal Cinemas and other participating theaters nationwide in RealD 3D and 2D. Tickets are on sale now at www.UltimateDoubleFeature.com,fandango.com, movietickets.com and at participating theatre box offices. Last year, when John Carter's disastrous box office performance was the talk of the industry, Disney was able to offset some of the losses by teaming it up with Marvel's The Avengers for a week or two at drive-ins and other double-feature-friendly theaters. While neither of these two films was the massive flop that John Carter was, Star Trek Into Darkness could benefit from an infusion of another million or so bucks before it leaves theaters forever to go to DVD and Blu-ray on September 10. World War Z was widely expected to bomb, and its worldwide success has been arguably the most intriguing story at the box office this year, so it's possible this promotion was conceived to help out the Brad Pitt-starring action flick before anybody knew that it didn't really need help. Sequels to both films are already underway.