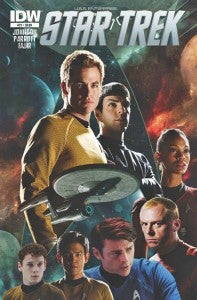 Paramount is moving the pieces into place to get a third feature film in J.J. Abrams's Star Trek franchise filmed in time to screen for the TV series' fiftieth anniversary in 2016--even if that means going forward without Abrams as director. Jon M. Chu, who most recently directed G.I. Joe: Retaliation, is rumored to be under consideration for the job, which opened up when Abrams elected to make Star Wars Episode VII, throwing the rest of his development slate into production limbo until 2015. Officially, of course, Paramount haven't named anyone yet and there's still some talk that they'd like to try and make something work with Abrams's schedule--even if all involved know that's just what it is--talk. What's more official is that Abrams is negotiating the details of his staying on as producer--something he's contracted to do for at least another film anwyay--and that Paramount is, according to The Hollywood Reporter, sticking with the writing team of Alex Kurtzman and Roberto Orci. Reported meetings with superhero writers Ashley Edward Miller and Zack Stentz apparently were fruitless, as the studio is standing by their men even though some had questioned whether the pair would still be the go-to choice without Abrams aboard. Working around their schedule was easier to do when Abrams was directing and timetables were generous, but the busy pair are currently developing reboots of The Mummy and Van Helsing for Universal. The Mummy, in particular, may be a time sink right now, as the film's director just left, throwing into question how much work might need to be done to accommodate the tastes of whoever comes on next.