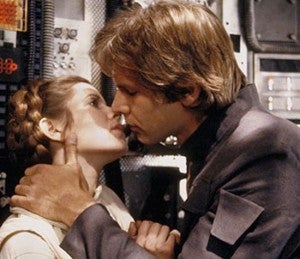 Earlier this month when news of Lucasfilm's acquisition of Star Wars first broke, Comicbook.com brought you five crazy rumors about Star Wars Episode 7. Since that time, the Star Wars Episode 7 rumors have only gotten crazier. Of course, some of these aren't rumors so much as just ideas put out there via various people, either jokingly or sometimes seriously. Nonetheless, here are five of our favorite crazy Star Wars Episode 7 rumors or ideas. Darth Vader Is Returning – The initial rumors all centered around Luke Skywalker, Princess Leia, and Han Solo returning. All three of those characters were still among the living at the end of Return of the Jedi, so it would sort of make sense that they would be back. However, as time wore on, the press needed new rumors, so it became time to start looking at even the dead characters. Yes, a British tabloid started the rumor that even Darth Vader would be returning. Robert Pattinson To Play Jar Jar Binks – Robert Pattinson was one of the first names that surfaced when casting rumors started circulating. With the Twilight series coming to an end, many assumed he might be looking for new job opportunities, and they were right. When the question was put to Robert Pattionson, he expressed that he was absolutely interested. In fact, he even said he would be willing to play Jar Jar Binks. Han Solo Will Die – In an interview from a couple years back, Harrison Ford said that he thought Han Solo should have died in Return of the Jedi, which was what the original script called for. Now, Harrison Ford reportedly is willing to return for Star Wars Episode 7, and since he wanted Han Solo to die previously, then he must still want Han Solo to die. Harrison Ford is coming back to put an end to Han Solo. Princess Leia Will Kill Han Solo – While more of an idea than a rumor, Carrie Fisher said she would be willing to return for Star Wars Episode 7. However, she also took it a little further and said, "I like the idea of being Mrs. Solo, when we've just fought and fought, and I killed him." Even though Carrie appeared to be joking with her comment, it's also been rumored that Harrison Ford might stipulate that Han Solo be killed off if he returns for Star Wars Episode 7. Could Carrie Fisher's joke combine with Harrison Ford's wish and become a reality? Boba Fett To Return – If Darth Vader can come back from the dead, why not Boba Fett? Actually, whether Boba Fett actually died has long been a disputed point. Even though he looked to be heading to his death in the Sarlacc pit, some Star Wars books have told of his survival. When Comicbook.com contacted actor Jeremy Bulloch, who played Boba Fett, he expressed interest in seeing the character return to sort out his differences with Han Solo.