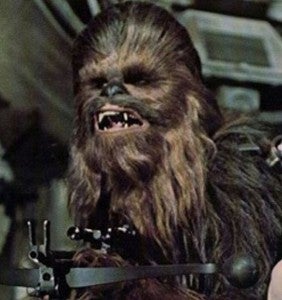 A casting call went out on Friday for a movie that appears to be Star Wars Episode VII, and it seems as though they're looking to cast a Wookiee--at least that's what Yahoo! News is speculating based on the following casting notice: "Tall Man (Male, 21 - 60) Male, 7 ft to 7.3 ft tall with a slim/thin build and upright posture. Not too worked out or too 'thick set' especially in the shoulders. Broad facial features would be a bonus." The casting call is nominally for an untitled feature, but the producers listed on the film are Lucasfilm's Kathleen Kennedy, Star Wars Episode VII director J.J. Abrams and regular Abrams collaborator Bryan Burk, which seems to be a giveaway. The "21-60" age group might be the most telling that, in addition to being a massive 7'+ actor, he can be pretty much anybody--presumably, given that it's Star Wars, the rest of that sentence will end with "...under the makeup" or "in the costume." And, yes, former Chewbacca Peter Mayhew fits nicely into the 7' to 7'3" requirement.