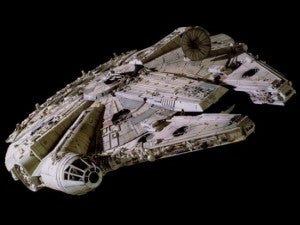 While some are petitioning the White House to have the United States government start work on the construction of a Death Star by 2016, another group of Star Wars fans is not waiting around to build a Millennium Falcon. And unlike the government project which we seriously doubt will ever get off the ground, it looks like the people behind the Millennium Falcon project are well on their way to accomplishing their goal. The project to build a full size replica of the Millennium Falcon was started by Chris Lee of Nashville, Tennessee, who has created a website at FullScaleFalcon.com. According to the website, Chris Lee is one of the original members of the 501st Legion of Imperial Stormtroopers, so he definitely has a lot of connections among Star Wars fans. According to a report on the BBC, other Star Wars fans around the world have rallied to help Chis Lee on the project. While the Millennium Falcon has yet to be built, some pretty concrete steps have been taken to move the project forward. A college student has designed a 3D model, another contributor has constructed the console and one of the ship's laser guns, and 88 acres of land have been purchased for the location of the ship.