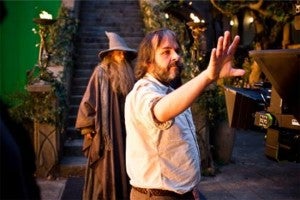 A couple days ago, Comicbook.com reported on how Peter Jackson voiced his support for George Lucas' Star Wars deal with Disney.  Jackson had told MTV, "I think it's better to have more Star Wars films than have no Star Wars films." While it's been widely assumed that Peter Jackson himself is not in the running for Star Wars Episode 7, he is one of the few big name directors left that hadn't denied it. Well, Access Hollywood officially put the Star Wars question to Peter Jackson. And yes, he's not going to be the director for Star Wars Episode 7, but he didn't rule out the possibility of getting involved with the franchise down the road. Peter Jackson said he hadn't really thought about Star Wars, noting, "I'm busy for the next couple of years. So I'm off the cards for the next 'Star Wars' film unfortunately." However, Jackson also praised the mythology that George Lucas created. Jackson added, "Someone would have to ask me and I'd have to have a very serious think about it." While any possibility of Star Wars might be years away for Peter Jackson, he latest film The Hobbit: An Unexpected Journey arrives in theaters on December 14, 2012.