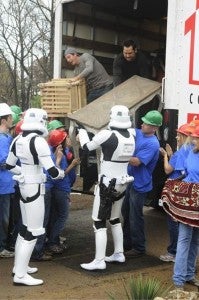 In a huge scoop, Deadline broke the story this morning that they had located a Star Wars fanboy who was angry about seeing Darth Vader and Stormtroopers on last night's episode of Extreme Makeover: Home Edition. Apparently, the fan thought the appearance was due to the impending Disney takeover of Lucasfilm, and seeing Star Wars characters engaging in a noble and charitable cause somehow trivialized them. Not to be outdone, The Hollywood Reporter even chimed in that the incident had sparked outrage on Twitter and among bloggers. And Entertainment Weekly posed the tantalizing question "Corporate synergy, or just Christmas spirit?" On the other hand,  IO9.com expressed that the real story was that Nikki Finke of Deadline knows the worst Star Wars fan in the entire world. In perhaps the biggest controversy to hit the Star Wars franchise since Disney announced they would be acquiring Lucasfilm, Star Wars Makeover-Gate has been quickly spiraling out of control. It's a wonder that the Feds approved the Disney acquisition of Lucasfilm today with this enormous controversy taking the Internet by storm. Comicbook.com reached out to the 501st Legion, whose members took part in the controversial charitable act, to see if they would be willing to issue a statement on Star Wars Makeover-Gate. We received the following response from Brian Troyan, who is one of the 501st Legion's PR Officers. We've reproduced the statement in it's entirety below. "The 501st Legion was very proud to have members from three of our local units (Star Garrison, Southern California Garrison, and Empire City Garrison) involved in last night's episode of 'Extreme Makeover: Home Editon.' We had an opportunity to make the presentation of the rebuilt home truly special for the Zdroj boys, and of course our volunteers were overjoyed to be able to lend a hand and a blaster to the cause. It should be noted, however, that our participation had absolutely nothing to do with the Disney acquisition of Lucasfilm. The holiday episode that premiered last night was actually shot about a year ago, long before the Disney-Lucasfilm deal was announced. Members of the 501st Legion use their costumes to give back to the community in hundreds of ways, both big and small, every weekend of the year and all over the world. Our members volunteered to help rebuild the Zdroj family's life, not on the orders of some corporate 'empire,' but because it was an opportunity for us to use our costumes and props to make the world a better place. We do it all of the time; this time, it just happened to be on television. To find out more about our mission, how to invite us to an event, or to get details on how to join up, you can go to www.501st.com or Like us on Facebook at www.facebook.com/The501stLegion. The 501st Legion is grateful to have the support of our fellow Star Wars fans. We are proud to have been able to play a small part in this good deed, and as "the Bad Guys who Do Good," we look forward to continuing our charitable contributions for many years to come. Duty! Honor! Empire!"