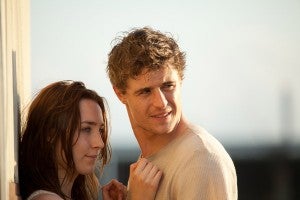 has the first report from the set of Twilight author Stephanie Meyer's alien invasion flick, The Host. A story that revolves around a group of human survivors working to avoid The Souls, an alien race who have subjugated most of the world. Irish actress Saoirse Ronan will play Melanie, the central character who manages to turn the parasitic alien that tries to bond with her to her own advantage in the first story Meyer has written for adults. "I didn't expect it to be so physical," Ronan told MTV News. "I've been in a harness quite a bit, I've done stunts, I jumped off a balcony it was 30 feet in the air. That was pretty cool." The movie, which also stars Jake Abel, William Hurt and Diane Kruger, will hit theaters in March 2013, just four months after the final installment of Meyer's Twilight Saga film franchise..