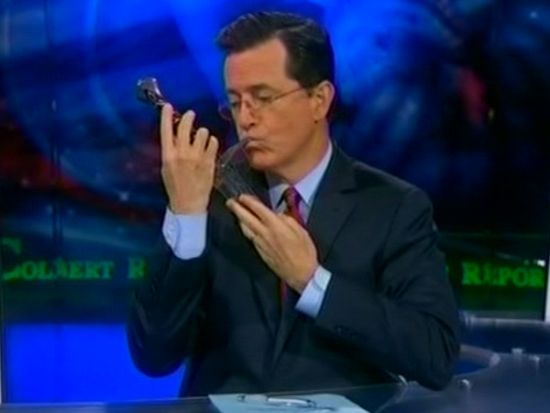 Does Stephen Colbert have a cameo in The Hobbit or doesn't he? In the first episode of The Hobbit week on the Colbert Report, Stephen Colbert didn't provide a clear answer. Colbert said, "Of course, once it got out on the Internet that I had visited the set of The Hobbit in New Zealand last year it touched off a firestorm in the media about my possible involvement in the movie." Colbert then showed off a series of headlines that went from asking the question of if he would appear in The Hobbit to saying that he would make a cameo in The Hobbit to saying that he would star in The Hobbit. Cobert added, "I have to say that was an exciting and unverified escalation of my career." Colbert said his lips were sealed to if any of it was true. However, Colbert then pulled out a sword and said, "If I did not appear in The Hobbit trilogy, why do I have the elvish blade Sting?" Colbert then gently kissed the elvish blade before putting it away.