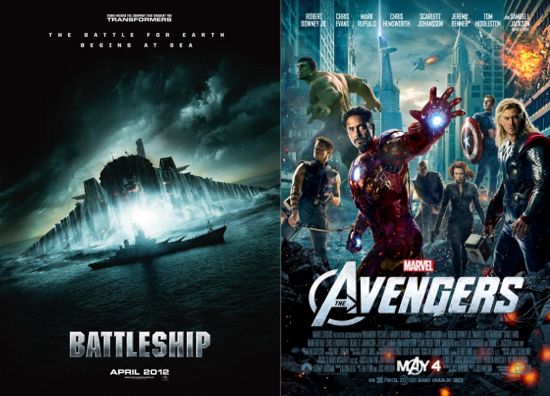 It was the best of times. It was the worst of times. The 2012 summer box office held excitement for some and disappointment for many others. For Disney, it was definitely the best of times. After John Carter left the Mouse limping, Disney roared back with two of the biggest blockbusters of the summer. The Mouse was definitely a winner with both the biggest movie of the summer in The Avengers and the biggest non-superhero movie of the summer in Brave. In fact, Disney's success basically told the story of the entire summer, where superhero movies and animated features ruled. Joining The Avengers in the top ten movies of summer were fellow superhero movies The Dark Knight Rises and the Amazing Spider-Man. Joining Brave in the top ten movies of summer were fellow animated movies Madagascar 3: Europe's Most Wanted and Ice Age: Continental Drift. Superhero movies and animated features made up sixty percent of the top ten summer movies. Most people expected the superhero movies and animated features that wound up in the top ten to do well, but the other four members of the top ten were a little more surprising. Seth MacFarlane's Ted had to be the biggest surprise of the summer. Every summer there always seems to one comedy that comes out of nowhere and amazes everyone, and this summer it was Ted. The movie about an obnoxious teddy bear took in an incredible $214 million. The remaining three members of the top ten were mixed successes as they had huge budgets that they did not fully recoup at the U.S. box office. However, with foreign box office numbers and DVD sales their studios should still do quite well. The Men In Black 3 restored the franchise with a healthy $178.5 million. Snow White and the Huntsman launched a new franchise with a strong $154.9 million. And Prometheus sort of continued the Alien franchise with a very respectable $126.3 million. Of course, some of the biggest winners of summer didn't even finish in the top ten, but were movies with small budgets that over performed and made tons of money for their studios. Small budget winners included Magic Mike, Tyler Perry's Madea's Witness Protection, The Best Exotic Marigold Hotel, and 2016 Obama's America. As far as the individual winners for summer 2012, this summer will likely be remembered for launching an unknown director named Joss Whedon's career. We're kidding of course as Joss Whedon already had a strong and supportive fan following, but The Avengers took him to a whole new level on the directing totem pole. Disney was wise to wrap him up in an exclusive contract for the next several years. Robert Downey Jr. proved to be a winner as well as the most visible member of The Avengers, but it was really Mark Ruffalo who surprised everyone by bringing an entertaining charm to his role as Dr. Bruce Banner/Hulk. In fact the entire cast of The Avengers falls into the winners category with a special call-out to Chris Hemsworth who managed to play a featured role in two of the summer's biggest blockbusters. In addition, the whole cast of The Dark Knight Rises deserve a seat at the winners table. In particular, Anne Hathaway silenced a lot of doubters by turning her role as Catwoman into one of the highlights of the last of Nolan's Batman movies. Andrew Garfield also deserves a call-out for giving a standout performance to help re-launch the Spider-Man franchise. As far as the losers, there are almost too many to list. It was definitely not a friendly summer for non-superhero action movies, war movies, horror movies, most science fiction movies, most comedies, and musicals. Battleship, Total Recall, Dark Shadows, Abraham Lincoln: Vampire Hunter, Rock of Ages, and That's My Boy all were big budget failures at the box office. If one movie had to define the losers at the 2012 summer box office, it was probably Battleship. Despite doing pretty well overseas, the $209 million budget Battleship opened to a dismal $65 million in the U.S. leading to lots of jokes about sunken battleships among critics.