It may not have aired on Fox just yet, but Marvel Studios have already made an extended Super Bowl XLVIII trailer for Captain America: The Winter Soldier available to watch on YouTube and via the Fox Sports website. Or, you know, you can skip the middle man and watch it below. As we're wont to do when these things drop, we watched it a few times in a row, took some notes and wanted to share with you some insights, highlights and our general favorite moments.

The monologue that opens the trailer, wherein Black Widow describes The Winter Soldier to Captain America(and, thus, to the uninitiated viewers) is really cool. Establishing the character as a badass and a significant threat in his own right before anybody knows what the big secret about The Winter Soldier is (we won't spoil here, but there's one that comic book readers know and even many casual fans could find out with a cursory glance at IMDb) is a strong move by Marvel. It's also good because it gave both Scarlett Johansson and Chris Evans a chance to do some capital-A acting in a quiet moment--something you don't get a lot in superhero movies, let alone in the Super Bowl ad for a superhero movie. It just might help to sway some people who aren't necessarily the target audience into watching.

S.H.I.E.L.D. Academy We're not 100% sure if that's the S.H.I.E.L.D. Academy that we saw in a recent episode of Marvel's Agents of S.H.I.E.L.D., but that standalone S.H.I.E.L.D. logo sure looks like the honor wall on which Skye saw the name of James Buchanan Barnes carved. Even if it isn't exactly the same one, it's nice to see that kind of synergy across the TV/movie lines. You can look at that and say, "Oh, it's from Agents of S.H.I.E.L.D. and, whether you're right or not, the fact is, that means they've done their job in terms of working within the constraints of the TV budget...and that for the first time, we might be seeing something that makes Agents of S.H.I.E.L.D. feel like it's a real part of the Marvel Cinematic Universe. Just the idea put a little charge in our spine. Also, kudos to Disney/ABC for getting a de facto Super Bowl ad for Agents of S.H.I.E.L.D. in here with the dozen or so appearances of the organization's logo.

The changing of the (sidekick) guard "Captain America needs my help: when do we start?" is unquestionably the highlight of the trailer in terms of a great, kick-ass line that also gives you all you need to know about a character. Follow that up with a shot of Falcon's wings in action for the first time and you've got yourself a genuine, fist-pumping hell-yeah moment the likes of which Peyton Manning has completely failed to deliver so far in the first quarter of the Big Game. 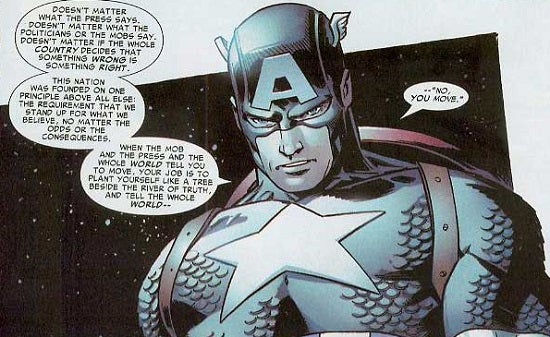 Cap gets a speech Captain America (in the comics) is well-known for his inspirational, rally-the-troops speeches--so much so that it's almost kind of a trope of his character and something you start to expect in big Avengers stories and Marvel crossover events. You can see one such speech above. The concept that Cap will be able to talk a lot about the cost of freedom makes perfect sense for this film; this is the first chance the filmmakers have really had to deal with the "Man Out of Time" nature of Captain America, and it's a film wherein he's going to deal with the post-9/11 security state that Americans live in, and the various ways that it's wildly different from the world that existed when Captain America was punching Nazis in a pre-CIA world.

"If they're shooting at you, they're bad." The '70s spy-thriller thing that drives the action in Captain America: The Winter Soldier has had a lot of fans worried that maybe the aw-shucks charm of the first film, and the humor of the Marvel Cinematic Universe films won't be in evidence in the new film. It seems, though, that Cap has you covered. That seems likely to be a one-liner in the middle of a really bad situation (perhaps the big battle at the end, or even just the one where it appears as though a rogue faction of S.H.I.E.L.D. is at fault for the injury of Nick Fury). This one's kind of an easy joke, since it's become evident that the premise of the film is largely a S.H.I.E.L.D. civil war. Nevertheless, giving us a little kick of humor in the middle of all of this high-tension.