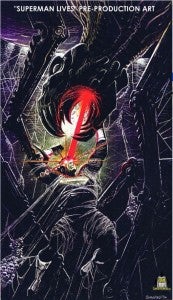 Anyone who has even a passing interest in the failed '90s Superman reboot titled Superman Lives knows about the scene, added at the insistence of producer Jon Peter, in which Superman finds himself squaring off against a giant, robotic spider. Kevin Smith, who wrote the original script for Superman Lives, has recounted his struggles to cut this scene, and Warner's insistence that it remain, during his stand-up comedy DVD, An Evening With Kevin Smith. It was, by Smith's accounting, a kind of demented demand by an executive producer who ultimately ended up using a similar concept in the Warner flop Wild Wild West. An image or two of this infamous sequence has existed for a long time on the Internet, from the portfolio of storyboard artist Tim Burgard, but a couple more surfaced earlier today at Comic Book Movie, where they note that Burgard was working on the film before Tim Burton was ever attached to the film. 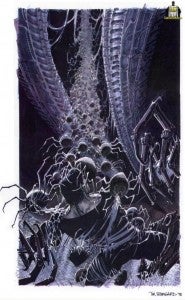 Ultimately, it's rumored that Warner had so much faith in Burton, and bent so much to his whim on the project, that when he left they found it was not salvageable. Whether there is any truth to that or not is not know, although there's a Kickstarter campaign to fund a documentary film about the failure of Superman Lives. Appearing to show Superman in his black-and-silver "regeneration suit" from the Death and Return of Superman comic books (which were a major inspiration for Smith's script), these images (and particularly the one above) give some of the best looks yet at what Superman would have looked like in the film that wasn't. Of course, following on the heels of the Death of Superman's success came Knightfall, in which Batman broke his back and briefly had to surrender his role to another vigilante. That story was loosely adapted in last year's The Dark Knight Rises.