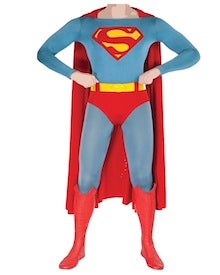 Costumes worn by Christopher Reeve as Superman and Marlon Brando as his father Jor-El in the 1978 cinema classic Superman: The Movie will be available for auction in July through Profiles in History. Taking place the weekend after the Comic-Con International takes over San Diego, Profiles In History's Hollywood Auction will be held the weekend of July 20 in Los Angeles, CA. Each of the costumes is complete and while, it cannot be confirmed whether they were worn onscreen they were definitely part of the actor's official wardrobes and were worn by Reeve and Brando. According to the auction listing, the Superman costume has various identifying markings, including two which misidentify Reeve as "C. Reeves," a common mistake even to this day. The costume is expected to net somewhere between $60,000 and $80,000 when it goes under the gavel later this summer. Says the Profiles in History entry:

"The costume was originally acquired by a sub-contractor who worked as a set decorator and a special effects flying/rigging technician on the first two Superman films at Pinewood studios in London. Its ownership was later transferred to a make-up artist in Nashville, TN, whose letter of provenance will accompany this fantastic costume. Studio labeled throughout, this costume is without question, the finest 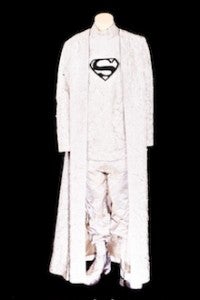 original Christopher Reeve Superman costume Profiles in History has ever encountered. Easily one of the most recognizable costumes in Hollywood history, it is the most important complete costume from this landmark film ever brought to public auction."

The Jor-El costume--shockingly still clean for something that's more than thirty years old and almost entirely white--comes with a certificate of authenticity from Warner Brothers (the studio that produced the film) and is also expected to sell for between $60,000 and $80,000. The Kryptonite (as well as the box it comes in) comes from Superman III and is confirmed as a screen-used prop by Christopher Reeve and comedy legend Richard Pryor in that film. The entry says that it has an imperfection on the crystal that can be identified in the scene. It should bring in $8,000 to $10,000, according to Profiles in History's estimates.